Ever wondered what else Swedes are eating, apart from meatballs and that pickled herring?

Well, nowadays the Swedish cuisine is very multicultural (with a lot of inspiration from for example Italian, Thai, Japanese and Mediterranean cuisines), and it is also characterised by fresh meat (fish in particular), crisp breads, and quite a bit of spices (cinnamon, dill and cardamom, for example) – as was noted by Jamie Oliver when he did his “Jamie does Stockholm“.

But, this has not always been the case, as is illustrated by the food blog Den Bruna Maten. The blog apparently started as a bit of a joke, where a few people had some (at that time -fancy) recipe cards from the 1970’s, and started cooking the recipes and documenting the process and the results. Fancy some Fake Pizza, Mustard breaded pigtails and Moles? Or how about Ham-egg in jelly? 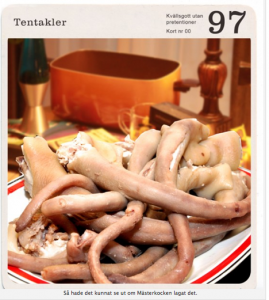 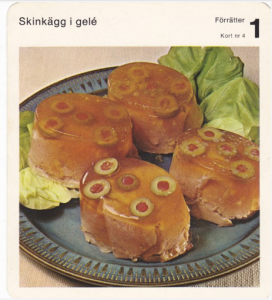 The food combinations, the names of the dishes, and some of the cooking techniques have proved to clash in a spectacular way with the 21st century Swedish food expectations. The blog has since become extremely popular in showcasing the worst of the 70’s Swedish food culture, and has also been published as a book.