I found a very useful summary by a language coach called Gruff Davis (yes, that is his name!), which I wanted to share because I wholeheartedly agree with all his points. He is using French as an example, but it can of course be applied to Swedish as well. Here it goes.

1. Understand the Language Learning Journey
Language learning has an appalling abandonment rate. A mere 4% of students embarking on language courses in schools achieve a basic level of fluency after three years. 96% fail to achieve fluency and/or abandon courses completely!

People almost always wrongly conclude two things from this:
Myth 1) Learning languages is hard.
Myth 2) Other people (but not them) are naturally good at languages.

One of the biggest reasons cited for abandoning is that students don’t feel any sense of progression. A GCSE student with an A* will visit France and find they can’t even have a basic conversation. People largely give up because they had the wrong expectations set. So let’s bust some myths:

1) Learning a language isn’t hard. It’s just LONG.
2) Everyone is naturally good at languages. You already learned one, remember? You’ve just forgotten how long it took.

I’m going to use a metaphor that I hope will help you get the knack. 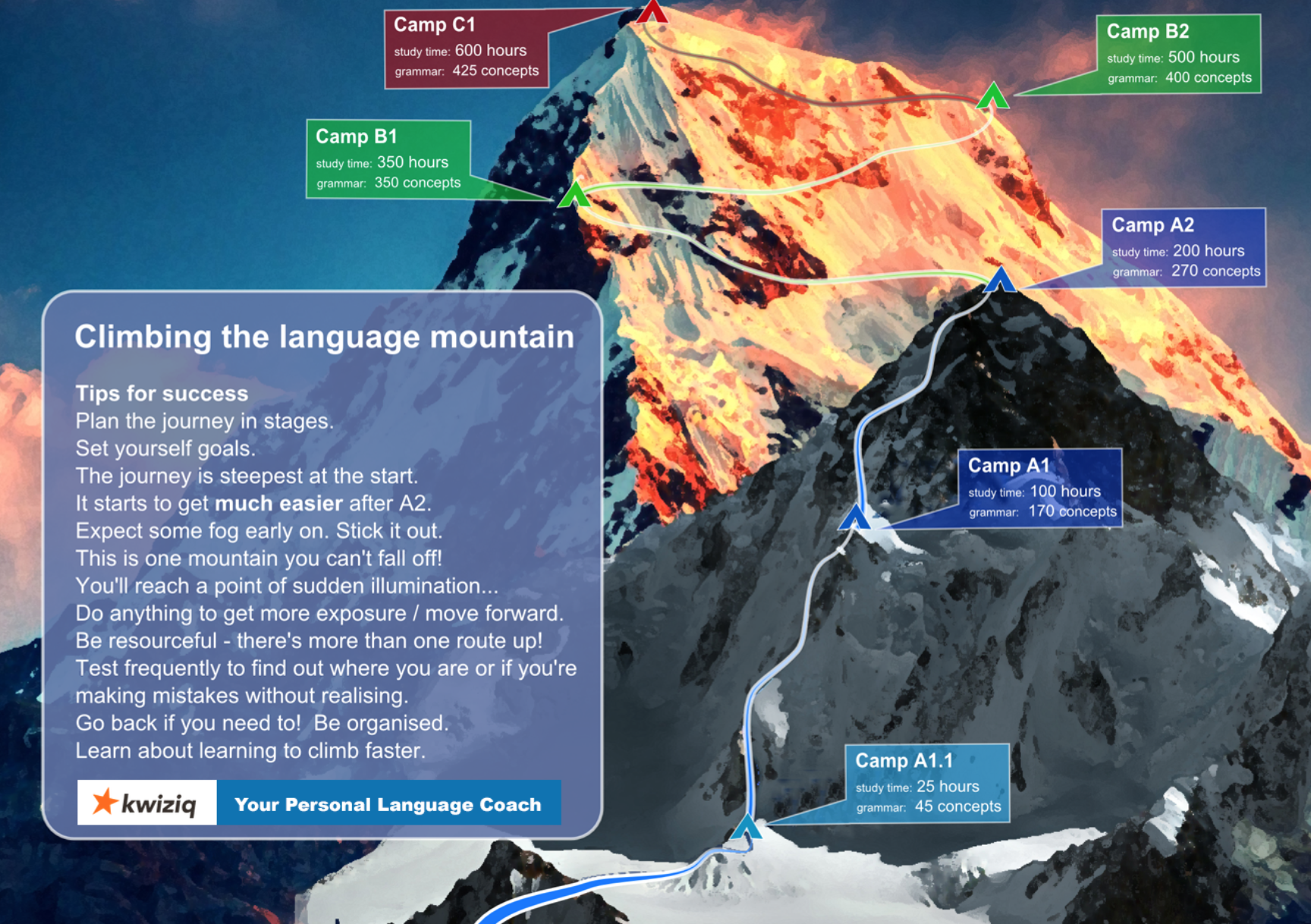 I think of learning a language a bit like climbing a mountain (a large but easy mountain, the sort that anyone can climb so long as they keep going).

Here’s what most teachers won’t tell you: It takes 600+ hours of study & practice to reach fluency in French (unless you already speak another latin-based language – a so-called romance language). Think about this. If (say) you learn 1 hour of French per week, then in forty weeks you’ll do 40 hours. You’ll need fifteen years at that rate to become fluent, not counting all the stuff you forget because of the gaps between study. (Harder languages like Russian or Mandarin can take 1,200 hours!)

At the other extreme, if you study really intensively, you can rack up 40 hours in one week!It’s possible (but not guaranteed) to achieve fluency in ten to twelve weeks at that rate. Most people don’t have the spare time to give that level of intensity, but understanding the journey helps you be realistic about what you can achieve so you won’t get demotivated.

2. Intensity is vital to learning a language quickly.
This is a double-whammy. 1) Immersing yourself as deeply as possible in the subject allows you to rack up the hours as quickly as possible. 2) Memory fades unless it’s used. Low-intensity studies (i.e. school French) are ineffective because their intensity is so low that you end up forgetting a large percentage of what you learn. So, try to learn as intensely as time will permit you to.

To use my mountain metaphor, the ground is icy and slippery and if you go slowly, you’ll slip back as much as you progress. The faster you can climb, the less you will slip back.

3. Be kind to yourself
I’ve used sunlight in this mountain metaphor to give you an indication of how it feels to be at these levels. It’s not until B1/B2 that the light comes out and it starts to feel really good speaking French. That happens around the 350-400 hours mark if you’ve never learned a second language before.

Expect a lot of fog and confusion for the first few hundred hours. It’s completely normal and you’re not stupid. EVERYONE feels this way, even the people who seem really gifted at languages. The difference is, anyone who’s already been through that and reached the sunlight expects this stage, and it doesn’t phase them because they know they’ll get there eventually. So, if you catch yourself saying things like, “I’m rubbish at French” or “I’m stupid” just stop for a moment and remind yourself that you’re neither and you will get it if you persevere.

4. Prepare for the journey
If you’re a complete beginner I find it’s really important to absorb the sounds of the language before beginning serious study. I listen to hours of audio (audio books are great for this) without trying to understand the content, but still actively listening to the sounds of the language to embed them. I usually find after a while I end up babbling them a little like a baby which can feel a bit silly . Which brings me my next piece of advice:

5. Practise looking stupid
Being self-conscious is your biggest enemy. You cannot speak a foreign language without feeling stupid at some point. You have to get over that. You have to twist your mouth into strange new shapes that make you feel like a caricature; you will speak and not be understood and you will listen and not understand. A LOT. It’s really okay and in fact necessary to learning. If you think about it, what’s the big deal? So you look stupid. Who cares?

6. Find out where you are (and therefore what the next stage is)
We advise you measure your level using CEFR levels (CEFR – the Common European Framework of-Reference for languages) as these are now standard across Europe. In Sweden, however, SFI have a different scale.