We have a saying in Sweden that goes Har man sagt A får man säga B (If you’ve said A, you should say B). However, this doesn’t translate into how Swedes actually speak; the saying continues with …så får vi C vad D E (…and we’ll see what it is).

The letters C, D, and E represent “see”, ” it” and “is”. Depending on the region, we like to drop letters differently to how they are spelt. Let’s go on a journey through Sweden and delve into our peculiar speech.

A classic Swedish children’s book is Astrid Lindgren’s Emil i Lönneberga. This story takes place in Småland, a region in the southern part of Sweden. The following is a dialogue between the young Emil and his best friend, a farmhand called Alfred:

In written form, this exchange would look different:

Note that the pronunciation here is typical of the Småland municipality. In most other parts of Sweden, we would say de (=det) and e (=är) instead.

Here you can watch that particular scene from the old Astrid Lindgren movie.

A popular way of saying good morning in Gothenburg is Gomorron, which also was the name of a television breakfast program for many years (Gomorron Sverige).

Here the ‘d’ is dropped and stuck together with the word morron. Correct spelling is god morgon.

Another classic is a series of comedy films from the 80s and 90s called Jönssonligan that take place in and around Stockholm. One of the characters there, Dynamit-Harry, (played by the same actor who plays Alfred in Emil i Lönneberga) enjoys dynamite and beer a little too much. After each successful operation, he has this to say:

The correct spelling is vilken, but it’s easier to pronounce the world without the ‘l’, especially when you’re excited.

The municipality of Närke, Östergötland, Västmanland and Värmland in the middle of Sweden are jokingly called Gnällbätet (The Moan Belt, because of how people sound). They often drop the ‘r’ at the end of a word, such as körkort (driver’s licence) which instead becomes kökot.

Common for most Swedish regions is the drop of ‘g’:

It happens often that a Swede would contract several words in speech (similar to good morning), especially when the expression is common and the sentence only consists of a few words. This means that a Swede who hasn’t seen anything (Jag har inte sett något) would say Ja:nte sett nåt.

To explore more pronunciation patterns, have a look here. 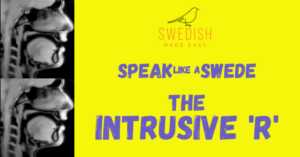