Jess is 21 and has been living in Sweden for the past year. She moved to Sweden to be with her girlfriend and their five Golden Retrievers. They moved from Uppsala to Örebro at the end of August last year and now have their own flat in Mosås. 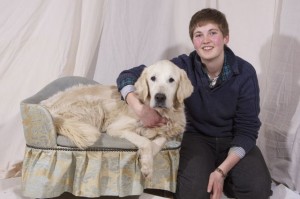 She is currently studying SVAS 1 (Swedish as another language) and walking dogs for people during the day. She originally comes from Gloucestershire in the UK where temperatures in the winter stay between about minus 9 and plus 3 degrees celsius. She is now learning what the word ‘winter’ actually means.

I met my girlfriend in England and decided to move to Sweden with her when she moved back in January 2012.

I knew that I was going to move about a year before I did so I thought that I ought to get a move on and try and learn some of this ridiculously complicated language that everybody would be using. So I searched online for Swedish teachers and found Anneli.

How much do you currently use the Swedish lanuage and why?

Now I use it everyday. I talk to friends, my girlfriends family, the owners of the dogs that I walk and the dogs themselves in Swedish.

In the beginning before I moved was when I found it most difficult. I felt like there was this huge, complicated language in front of me and I had no hope of trying to learn it all. But when I started talking in Swedish it was only a matter of time before I started picking up words and learning more all the time.

When somebody thought I was from Norway because they noticed a slight accent but had no idea I came from England. That would be thanks to Anneli, who taught me from the very beginning to pronounce things properly. I remember having particular trouble with ‘sju’ and ‘sjö’…

Can you recommend any Swedish books that are good for learning Swedish?

A personal favourite of mine was always Kalle Ankas (Donald Duck) comics because even if I did not understand something fully, I would be able to look at the picture and see what was happening, thus learning a new word or two at the same time.

Tyda.se was and still is my best friend. It is an online dictionary that tells you whether the word is ett/en, gives the plural and for most things it gives a picture to help you commit it to memory.

Swedish is actually not as complicated as it sounds or looks. When I first arrived in Sweden, I was scared to speak in case I made mistakes but having a conversation in Swedish is absolutely the best way to learn it. Ask or look up words if you don’t know what they mean and don’t worry about making mistakes – it is human to make mistakes, that is how we learn!