One learner recently asked me about the Swedish Name day. Anyone who has seen a Swedish calendar, may have seen names next to each date. Usually 1 or 2. This is called “Namnsdag” – name day. Apparently, it was traditionally a way to keep track of dates by using names instead of number-based dates (so farmers knew when to plan their crops, among other things). However, these traditions have somewhat been lost following several name day reforms.

In Sweden today, we sometimes celebrate a person on their name day. You may get them a card, a cake, some other little present, or perhaps just say “Grattis på namnsdagen”. The tradition of celebrating name days came about because of the Christian church tradition (or so the Swedish wikipedia tells me). Apparently, celebrations of birthdays were viewed as pagan and anti-Christian, whereas celebrating the name day was more accepted, due to its links to church and baptism.

Here is a list of all Swedish name days in the calendar. Oh, and by the way, the name day for Anneli is 21st of April, so it is actually today! 😉 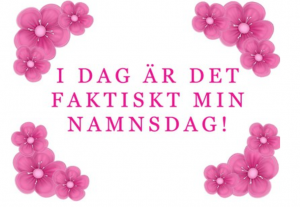